FREE SHIPPING for all orders to Ireland: use the code MADJESSIEFREESHIPPING at checkout I arrived in Glasgow early and had a long and leisurely breakfast with my sister-in-law in a cozy coffee shop in Govanhill. Then we hit the road.

My boat was sitting in a boat yard about an hour and a half north of Glasgow, in the region of Argyll and Bute, on the shores of a wee loch near the tip of a peninsula. 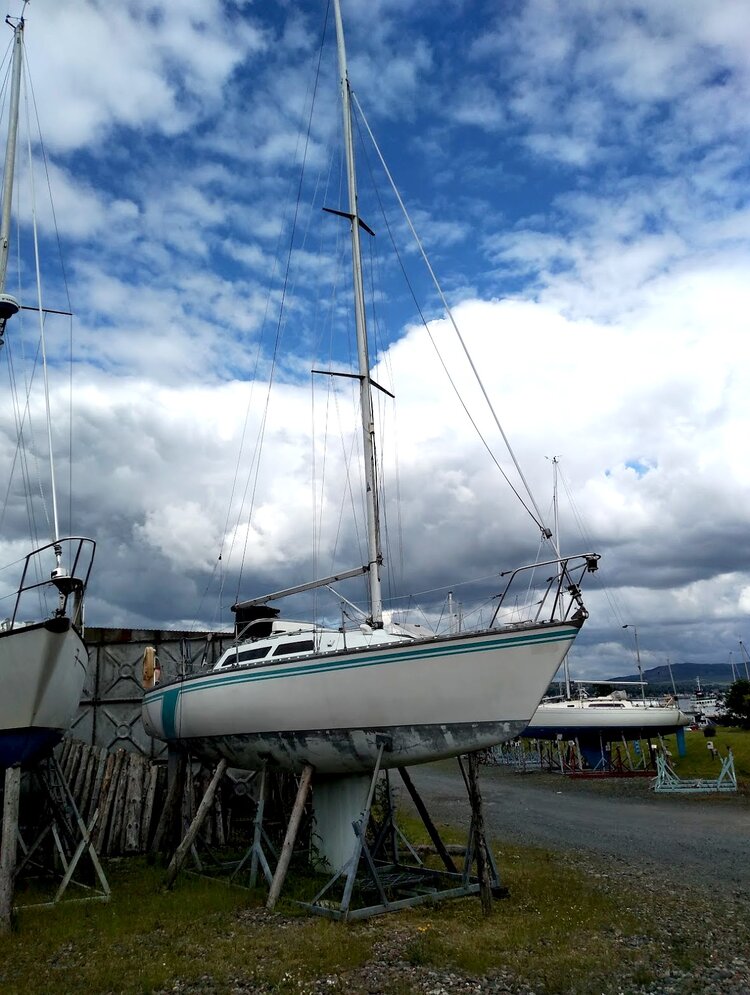 She was one of the first boats as I came into the yard, and my first impression was that she was a big boat for her size... and that the semblance of a ladder resting against her was probably the most dangerous un-ladder-like contraption I had ever seen. We climbed up the wobbling ladder, I sat in the cockpit, climbed into the boat and had a look around both on and below deck.

I crawled into lockers and lay out flat on the berths (i.e. beds). I stood on my tippy toes, and looked at the engine. I opened up the floor to peer into the bilges. I stomped on deck and peeked into the anchor locker…

She was old and worn, and quite neglected. I could stand upright inside. I sat at the table. She felt right. 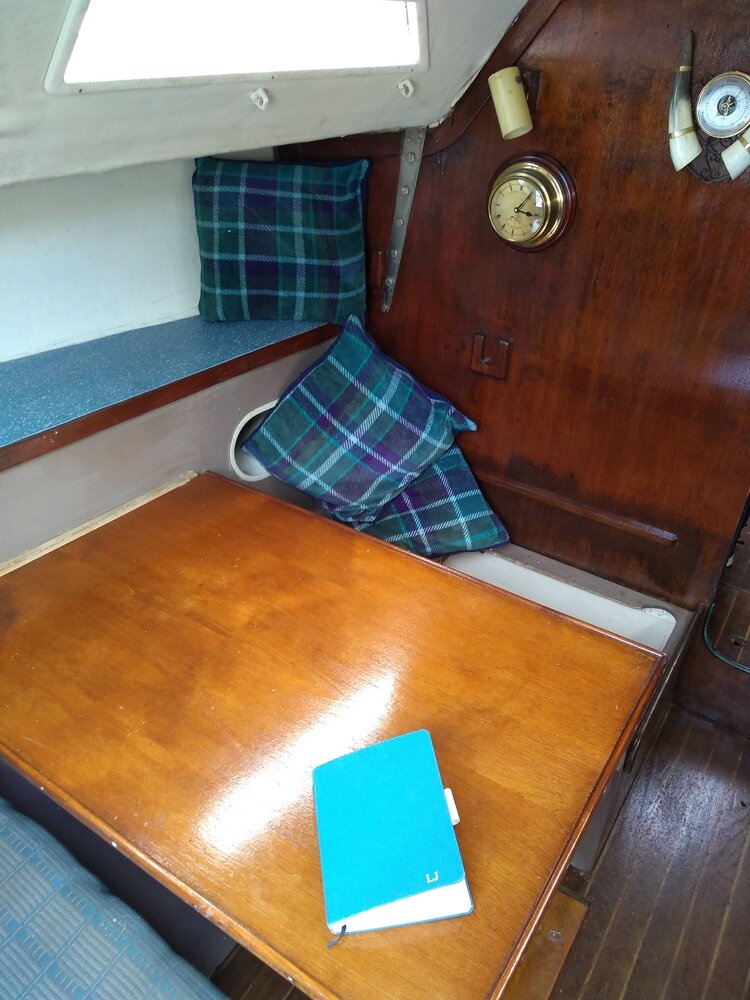 The owner was from a different generation, an Englishman who had never ‘done a deal’ with a woman before and ‘wasn't quite sure how to go about it’.

I was tempted to suggest that he speak slowly, but he was already doing that (speaking with patience and kindness - something that my generation could interpret as condescension), explaining to us how basic electricity worked, how to turn on the engine, and every now and then marvelling at the fact that we were women who enjoyed sailing and boats. (I have, over the years, met many older men who relish in taking to the sea and lament that their partners do not have the same attraction to being on the water.)

He turned on the engine to show me she worked, answered my questions, and pointed out a few bits he had worked on and mended. We chatted lightly in the cockpit about how she fared in the water, and boats in general.

Before travelling I had spoken to the owner over the phone. I had put down a deposit pending a survey (or so I had thought). After seeing the boat, I said I was happy to go through with the sale - pending a survey.

(I mean surely this is how all boats are sold? Thats what everyone on the internet says… This is common knowledge, common practice, common sense, right?

What's that they say about common sense?)

Well. We were far away from any internet or wifi signal here. This was the type of situation, it seemed, where deals were agreed through handshakes, not paperwork.

He was a cute hoor. Sure didn't he go and get indignant, protective, hurt when I mentioned the survey prior to payment.

-He was a trustworthy man. His word was good. If he said it was good it was. Was I saying I didn't trust him? Was I insulting his integrity??

- Why would I need a survey? He was affronted, nay, betrayed. Was I disparaging his work and his good word?

-I needed a survey. My marina fee was on the understanding that I had insurance. Insurance relies on a survey. I couldn't leave without a survey.

He was under the impression that I was coming to pay him in cash today, he pointed out in mock anger.

I tried to stay firm, but I had a problem. This boat was just about in my price range. However my price range was not very much. Which meant the boat could (and would) get snapped up in one of my heartbeats if I didn’t secure it. And it didn’t seem that my large deposit would stop this from happening.

At this stage I had travelled all over Ireland and the UK viewing boats. I had rang up dozens and dozens of boat sellers. Beautiful boats had come and gone because I couldn’t get there on time, and others with deeper pockets had swept in before me.

So… I agreed to buy the boat without the survey (I know! Madness!). I had to explain the concept of International Bank Transfers taking a few days as now it seemed he thought I was the one being the cute hoor. He sent his son down to see me to ensure he would get paid, who explained that online transfers were indeed a difficult concept. I realised the man had probably refused offers and was now afraid I was backing out of my side of the deal. I reassured the son that I would be transferring funds that week. 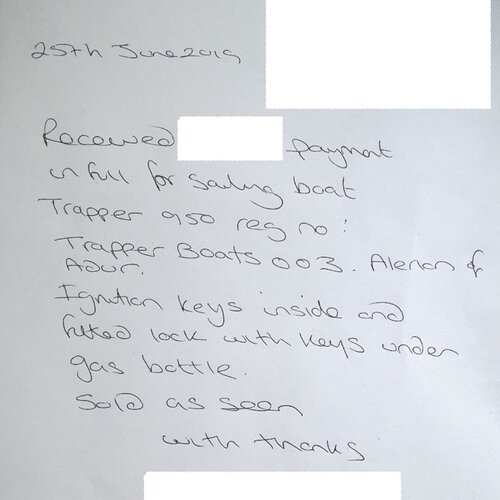 I walked down tho the boat yard offices, and signed some papers confirming I was the owner of Alerion, and would be responsible for fees due (basically her parking fees from this moment on were my responsibility).

A couple of days later, once my part had been paid, I would receive a photo of my receipt by request. 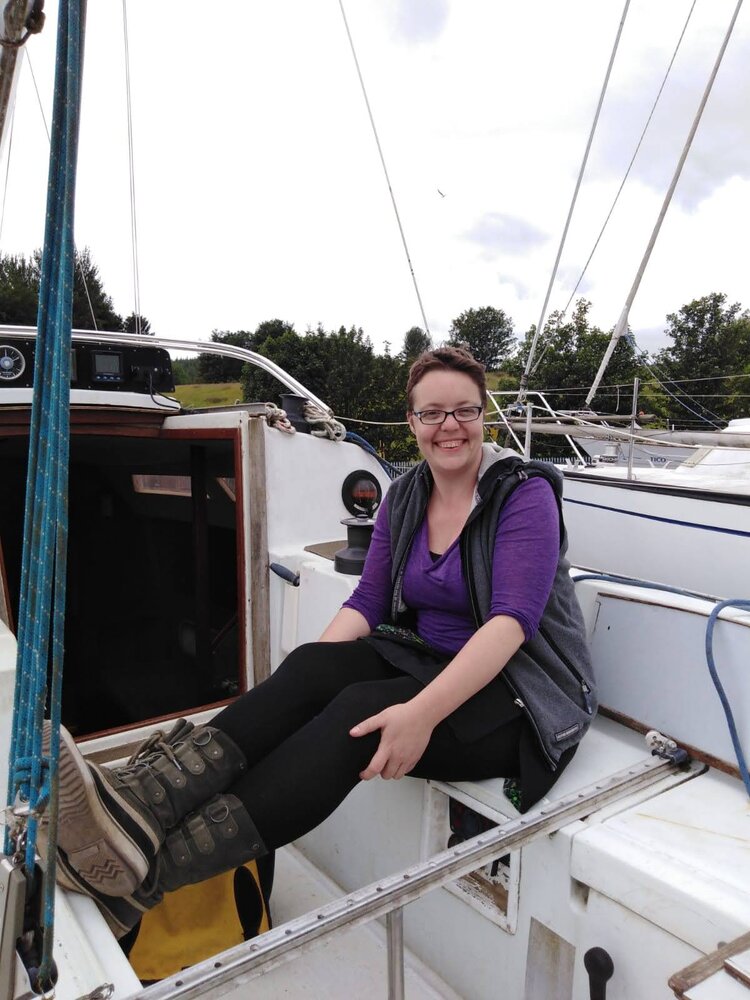 I arrived home to Dublin airport a couple of hours later, after a delayed flight, and I drove home. I was delighted that I had bought my boat! But I was also thinking WHAT had I just done. Was I mad? I was terribly upset and excited and scared and a whole host of other emotions churned around my sleep deprived body.

What had I done?

Lesson of this chapter: Get yourself a survey before buying a boat!!!

(We will find out more and why as the story unfolds!)

Are you buying a sailboat? Are you off to see her for the first time?

Some things I did, and others I wish I did: